Lahore from the Sky (Part 1)

Recently, I had the opportunity of chartering a flight over Lahore. It's quite an experience. There are a couple of flying clubs over at the Walton Airport, and for the right price they'll take you on a tour of the city. I recommend these to anyone as one of best ways of spending an afternoon.
I managed to get some pictures using my camera phone. The cockpit glass was scratched and so some of the pictures are less than perfect. Still, these photographs offer a unique view of Lahore. 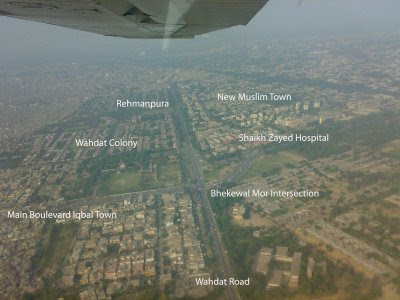 Above it the view over Wahdat Road looking north towards Ferozepur Road. Punjab University is on the bottom left and you can see the Canal stretch from the top left of the picture across the screen. Ichra is to the top left.

The next few photographs were taken as we flew over the Badshahi Mosque and Minar-e-Pakistan area. I've taken some "touristy" shots, but there's lots to learn about the city. Note the density of the Walled City and the Qilla Lachman Singh area on the bottom part of the picture. 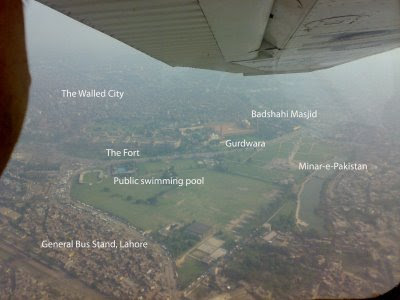 As we swung around to go over the mosque and fort again, we flew over the Karim Park area. I got a good photo. 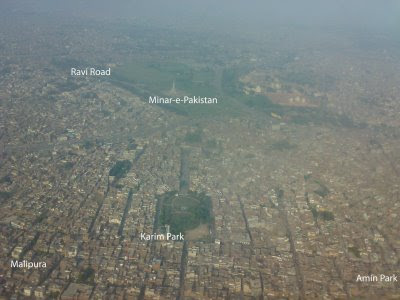 I have a map of Lahore prepared by the Surveyor General of India in 1927. I've cut out the portion of this map showing the area I've photographed (and indicated where the new urban localities have come up). The differences are startling, especially since it's not been 100 years since this map was published. 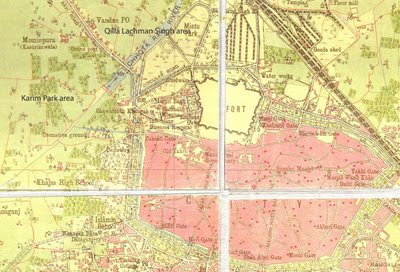 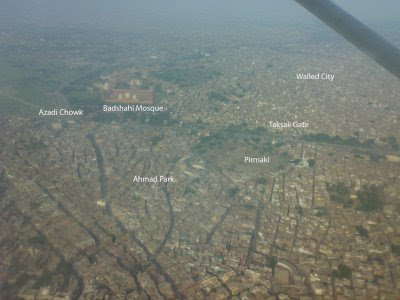 As we flew over the mosque again, I got a good photo of the entire Mosque/Gurdwara/Minto Park/Fort/Minar-e-Pakistan area. 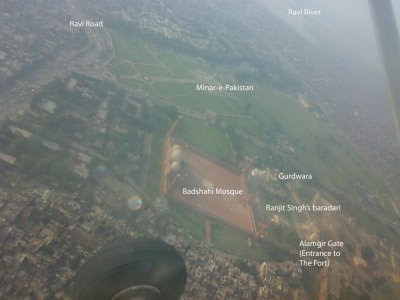 The great things about the charter flight is that we were able to tell the pilots where exactly to go. Since we were in the area, we decided to cross over the Ravi and fly over the Shahdara area. I got a few photos of Jehangir's Tomb and Asaf Khan's Tomb. 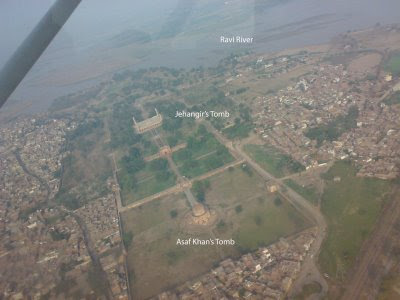 You can read more about the Tomb here.

In the next two photos, the layout of the Mughal garden can be appreciated. 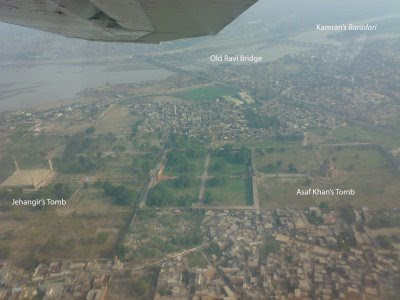 Kaman's Baradari is visible at the top left of the photo. A better image can be seen here. 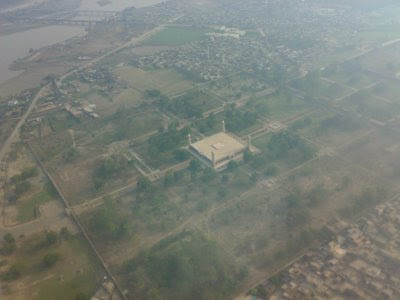 We then flew back over the Ravi. I managed to get an important photograph of "North" Lahore. This is the area to the north of the Railway lines and bound by the Bund Road. This is unregulated, forgotten, poor and dirty Lahore. 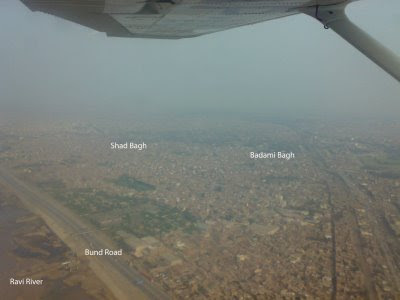 When I look at densely populated unregulated development like this I can't but ask myself what forces operate to dampen the market forces. There has never been any redevelopment of this area. The only development Lahore has known is the conversion of agricultural land to residential purposes. Older commercial areas then slowly turn onto industrial areas. Our urban planners must look towards redevelopment as the basic land management tool.

We then flew over other parts of the city, starting with the administrative heart of Lahore. 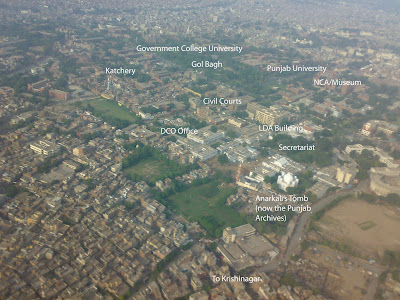 We then flew over Chauburji and the Miani Sahib graveyard (which our pilot insisted on telling us was the "largest graveyard in Asia," whatever that means. Note that the ruin that remains of Chauburji was one of the corners of the walls of the garden of the Mughal princess Zebunissa, the daughter of Mughal Emperor Aurangzeb. 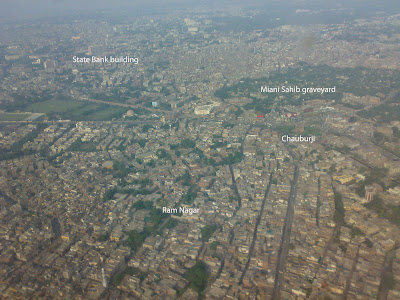 Chauburji is located close to Mozang Chungi (the old toll station for where you paid before entering Lahore from Ferozepur Road). In fact, Mozang was a village considered, at one time, to be outside the city. The 1927 map by the Surveyor General shows what this area looked like less than 100 years ago. 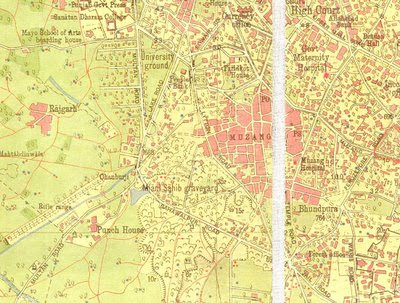 If Mozang was a village on the outskirts of Lahore, wouldn't that make Princess Zebunissa's garden an early version of a Farm House? 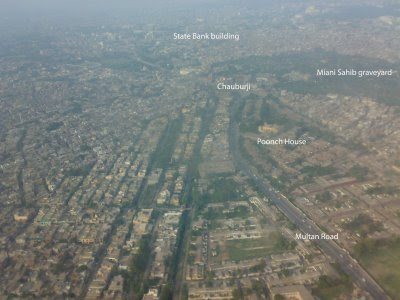 What brilliant shots and thanks for alerting me to the post. Advance warning: I am going to cross-post this on Lahore Nama. Hope you will be Ok with that?

I am quite envious - I also need to be on board on these amazing flights...
cheers
Raza

Hey rafay... glad to see you've started blogging... You've already convinced me I need to take a flight over Lahore... You might want to change your settings so that anyone can comment on your blog rather than just registered users... keep it coming...

First attempt! What an attempt. See you more in the blogsphere.

Peace,
A rather nice "first attempt" done by use of your cellphone.
I do sincerely appreciate your effort.
It brought not only a perceptive taggling to the rhodopsine-pigment of my retinal areas , but rather made me feel like flying togehther with the `Falcon`s of Lahore`
Seated here amongst "ice-bird" in the land of cold north, I just felt I saw a glimpse of Lahore Zoo.
Adam Insan.

bro
how mch it costs to arrange such a feast.

And thank you for taking the time out to actually write out the names of the places there; this gives them great value. Nice.

think these are great shots never mind the quality...we could use some of these for the presentation...
great work would love to see Lahore from this vantage point...must plan this..Best wishes Eram

Welcome to all of you at Free Isitkhara center. You know that Istikhara is Religious act for before start any work or business or other daily life matter must perform Istikhara for knowing the Allah decision for work is better for us or not. Aamil MS Jaferi offer Online Istikhara service without any charges also doing Rohaniilaj for any major diseases. You can contact on Phone +923244544864,
+6281315996474 for sort out any daily life tension.
Rohani Zaicha
Istikhara
Horoscope
Astrology
Istikhara for Marriage
ROhaniilaj
ROhani Wazaif
Amil Online
Amliyat
Black Magic ka tor
Marriage problem
Husband Wife Problem