Lahore from the Sky (Part 2)

A Lahore you don't get to see everyday

The great advantage of chartering a flight (I recommend this to everyone, by the way, as one of the most entertaining way to spend an afternoon) is that you can treat it like a taxi.

After having flown over the older parts of town, I could sense that the pilots were falling to routine and were just covering a well worn "tourist" route. I asked them to fly over newer parts of Lahore.

I've written on Lahore's urban sprawl, but it really stands out from the sky. Now's a chance to show everyone what it looks like. 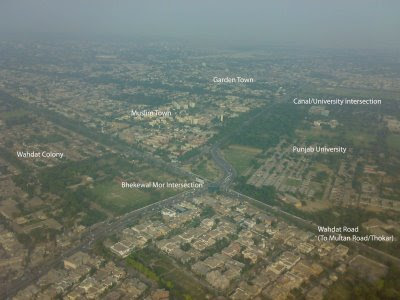 Above is the view from over Iqbal Town looking roughly eastwards. Note that residential housing dominates the photograph. To compare how Lahore has grown, I've cropped a portion of a 1927 Map of Lahore that I have.

In 1927, the only telling landmark is the line (on the top left of the map and heading downwards) demarcating Ferozepur Road. The area that is now Iqbal Town, or village Bhekewal, was mostly fields. There was no Punjab University on the Canal at the time. In fact, the land forming the University north of the Canal was used, it seems, as a rifle range. 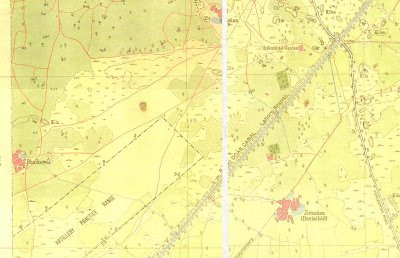 Our houses are increadibly energy inefficient. From construction materials like cement and steel, which are energy inensive to produce, to energy consumption during use (like electricity, other utilities and automobiles) our houses consume massive amounts of energy. According to Economic Survey 2006-2007 (I know a new one has been published; I just haven't got round to reading it yet), the Household Sector consumes nearly 44% of all electricity produced.

Feast your eyes on prime examples of our energy guzzling urban development template: 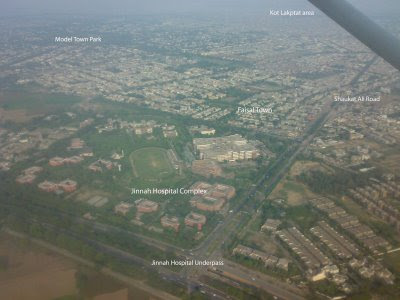 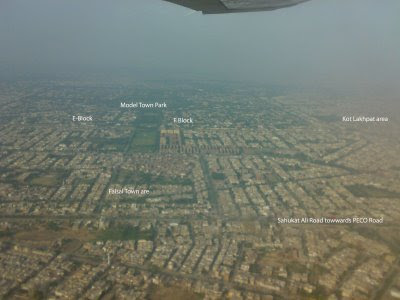 Model Town is an old residential development dating to the early 1920s. It was an early example of the Garden City movement in this part of the world (the Garden City Movement is alive and well in 21st Century Pakistan - but that's another story). As a cooperative society, it was also one of the few instances where George Jacob Holyoak's revolutionary ideas on cooperation actually worked. Faisal Town is also relatively new (70s and 80s, from what I can gather).

We soon flew over parts of Johar Town and the many private housing schemes that are cropping up there. 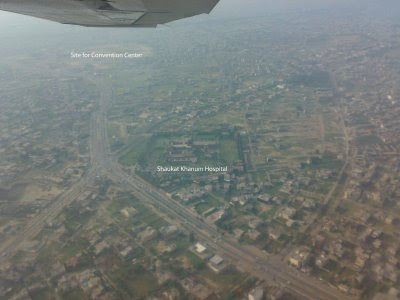 For a better idea of all the housing societies coming up (as can be seen from the photos, most of these haven't been fully built up but will be in the next decade or so), click here (warning, large satellite image of Lahore). 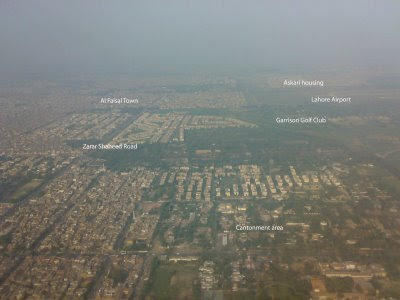 Note the difference in density between Cantonment and non-Cantonment land (roughly, right and left of Zarar Shaeed Road). Below is another example (although the photo is really poor quality). 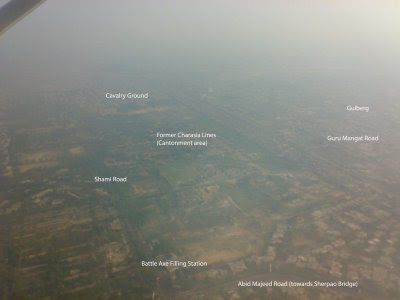 I can't get over the difference in density. Note the area along the railway lines and along Guru Mangat Road. This is civilan/Railway land. But note the almost deserted look of the land in Cantonment. People say there is a housing shortage fuelled by a lack of available land. Is this so? Or do we need to change our definition of what available land is.

Below is a look of how the Cantonment looked in 1927 (hint: enjoy the street names). 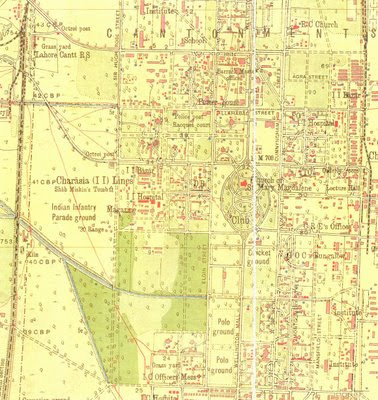 Brilliant photos and the 1927 map is a gem..
Oh, I can't wait to take these flights -
thanks for sharing the photos and fixing them for the charter-deprived readers such as myself
Raza